Written by CouncilAdmin on December 26, 2020. Posted in Uncategorized.

Greater Green Bay organizations are being challenged to find workers with the right skill sets to meet employers’ needs. They address this challenge with two strategies: 1) Attract & retain new workers from outside the Green Bay area, and 2) Grow our own by training and retraining individuals already living in our area.

The “attract and retain” strategy is a significant challenge, but three local advantages might offer some success: digital access, the successes of Titletown Tech, and the work of Greater Green Bay Chamber. That strategy alone, however, is not likely to meet our needs for the future. It will be important to focus future efforts on the “grow our own” strategy. Still, these two strategies are slow to provide the workers we need. A more immediate way to fill our workforce needs is simply to retain our retirees!  Our aging population makes it a natural choice.

An aging Green Bay area population will have workforce impact. Aging will affect the availability of people in the workforce as well as the demands for a workforce to serve the needs of that same aging population. This graph suggests that the pool of the workforce in all age groups under age 55, our primary workforce to date, will decrease. At the same time the percentage of individuals in the 55-and-older group will increase significantly by 2040. 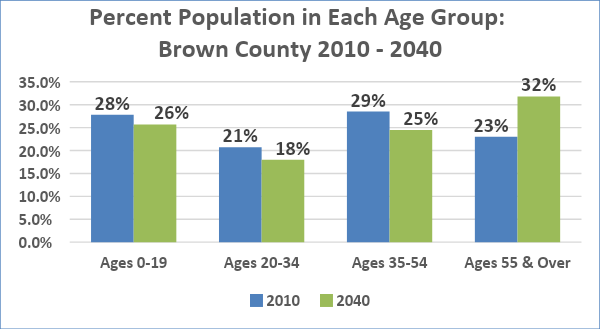 Each day approximately 10,000 Baby Boomers turn 65. By 2030 all of the Baby Boom generation will have reached the retirement age of 65. Ken Dychtwald and Robert Morison, in their new book, What Retirees Want, present evidence that the 65-and-older age group may provide an opportunity to buttress the workforce. In 1990, 12 percent of those aged 65 and older were in the U.S. labor force; by 2020 that had increased to 20 percent.

Why have we seen this increase in labor force participation by the 65+ age groups? Dychtwald  and Morrison cite four factors:

1) increasing life expectancy has led to retirements that might last 20 – 30 years;

2) changing from defined benefits to defined contributions in the financing of retirement makes retirees more dependent on the unreliable performance of their 401k accounts;

3) economic uncertainty (and I would add concern over rising health care costs) followed the great recession of 2007-2009; and

Signals that the retirement age group might indeed be a source of opportunity for meeting workforce needs can be found in our own area, nationally, and internationally.

Factors to consider when developing your “Retain your Retirees” Plan

The signals clearly indicate that the challenge of an aging population could be a workforce advantage for organizations that can design a thoughtful, equitable and beneficial plan to retain retirees.